It’s been a long, blog-less time. Since my last post, I had a birthday, bought a new couch, did a lot of yoga, loaded up on freelance work, found four bunnies in the backyard, watched the snow melt, got married, and found a confused German Shepard in the backyard, too, and shooed him gently away, out the gate.

The German Shephard incident was just this week, and my own dog watched this whole interaction happen from the bedroom window, howling at the injustice of it all.

I’m realizing that when you own a house, your sense of personal space gets much larger. What I see as mine is not just my body and my clothing anymore, but extends across the yard, over the vegetable garden, all throughout the garage and along just this side of my fence. This sense of ownership has quietly morphed into a territorialism that keeps me just a little anxious about everything I see on my property—what’s that squirrel burying by my begonias? Whose child is that biking through my alleyway? Why do the freaking neighbors always have to park their car DIRECLTY in front of my house?

And then to put it all in perspective (or perhaps just tilt it so it catches the light at another angle), my next-door neighbor was evicted and moved into an apartment.

Now a camp of activists are living in his foreclosed home. They don’t own the house, so they aren’t burdened by a homeowner’s paranoid sense of responsibility about the property. Examples: they flick lit cigarettes into the back yard, which sprouts grass a foot high each month before getting mowed (Andrea=minor panic attack). They ignore the trees growing from the gutters and let the busted-in windows carry the sound of their music out into the street (Andrea=moderate panic attack). They hold loud rallies in the front lawn and ask us to please quiet our anxious dog so they can “concentrate” (Andrea=major panic attack). 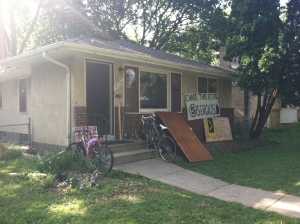 This week, 75 of them launched a protest against the 30 sheriffs who came to take the door off its hinges and kick them out. (The protesters returned shortly after the sheriffs left and began occupying the house again.)

Their idea is that they will stall the entire eviction process long enough that Chase Bank will grant my neighbor a mortgage modification and allow him to stay in the home. The odds of this working out are looking ever more doubtful, and we’ve been warned to expect many more protests and probably more arrests.

In my eyes, the good these activists are trying to do—help a family fight a giant corporation for the mortgage modification they requested some time ago and believe they were promised—is diluted by their total lack of respect for the property itself. They’ve forgotten that this building is not simply a prop or symbol of injustice, but a home, where someone once watched television and flossed his teeth and sent his 10-year-old son over to the lesbians’ house next door for a late-night cup of sugar and looked through the kitchen window at the moon falling over the yard and the fence and the deflated basketball and thought, “This is all mine.”

Maybe my neighbor will get to move back into his home and his son will come back over to play bags with us in our backyard. Maybe he won’t, and the last of the protesters will stay until winter moves in through the broken windows. Maybe a slick developer will buy the house, flip it, and by fall we’ll be living next door to some other, boring, young married couple. Maybe some tragedy will befall us before any of that happens, and we’ll be the ones begging for help from an unsympathetic bank, realizing we never actually owned those begonias to begin with.

Oh, the things of life.

This entry was posted in Uncategorized. Bookmark the permalink.

One response to “On Ownership”