Autopsy of a Downloads Folder

Dumb UPS has screwed up my night, delivering a package so late that I had to postpone my trip to Iowa until tomorrow morning. Which means I have, unexpectedly, a free evening on my hands. So I decided to clean out my laptop files, and let me tell you–if you are ready to be get in touch with your true self, no holds barred, then sneak a peek at your “Downloads” folder sometime. It’s like a graveyard of random files and unflattering pictures–almost as embarrassing as mining your old Google searches, circa 2007.

Anyway, here are some of the most interesting things I found from my computer tonight:

1. John Hinckley’s love letter to Jodie Foster, in PDF form. Yeah, that’s right, the one that starts out “There is definitely a possibility that I will be killed in my attempt to get Reagan” and ends with “I love you forever.” According to my computer, I downloaded this important document from the internet at noon on Thanksgiving day, 2011.

2. This picture of my poodle WORRIED SICK about me during a nasty bout of stomach flu in Chicago (Not pictured: Lovie, because she is gagging and opening windows to clear our B&B of vomit smells).

3. A Quicktime movie of Aziz Ansari’s “Dangerously Delicious” comedy special, which you can still download for 5 bucks here. Highly recommended. Last semester I showed my students the part where he deconstructs his nephew’s college application essay, but I didn’t remember until we were watching it together in the classroom that during this particular bit, Ansari makes about 17 references to graphic oral sex. (I then went on to be a very popular teacher with stellar evaluations and a chili pepper on ratemyprofessor.com).

4. A Ryanair boarding pass from Rome to Dublin from exactly one year ago, and this culturally relevant and delicately composed picture of a McDonald’s in Vienna (watch out, National Geographic!).

4. TWO full episodes of Saved by the Bell. (The one where Zach dresses as a girl to go on a pity-date with Screech, and the one where Jessie goes nuts on caffeine pills). I believe I paid $1.99 for each of these in iTunes, and later made my students watch both of them.

5. Another flattering picture of me in Prague.

When I went down to Illinois to see my parents last week, I was surprised to discover two things:

1. It had not rained in three months, so the grass everywhere–in my folks’ backyard, across the public park–was yellow and crispy. Crunchy brown leaves lined the streets, as if it was October and not August.

2. Despite the drought, my family’s tomato plants had managed to bear more fruit than they have in years. We ate bruschetta and homemade sloppy joes and pasta sauce. We served every meal with a side of sliced tomatoes, and when we opened the refrigerator to get another beer, tomatoes flew out like untamed birds. My grandmother begged me to take two boxes back to Minnesota, and as I packed them in my car I noticed that her backyard picnic-table was covered with the fat round fruit, a few rolling off the side and landing on the dry, brittle grass below.

Tonight when I got home from work I decided to make tomato sauce because a) it should be easy to freeze the extra, and b) did I mention I have TWO BOXES of tomatoes.

The Trusty Internet advised me that there are way too many recipes out there for a gal to choose from, so I decided to just make it up as I went along. Sometimes my improv recipes are delicious (ham & potato soup!), and other times my Lovie has to put on a brave not-nauseous face while she’s eating (Cheez Whiz casserole!).

But this one smells good. Onion, green peppers, carrots, garlic, oregano, brown sugar, and basil. And of course tomatoes. Now I guess I’ll let it simmer until I’m too hungry to wait any longer. 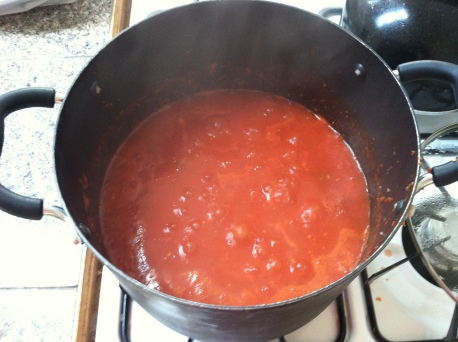 I only got a little on the ceiling.

as long as the poodle is comfy.

This afternoon, I slipped out of my office to grab something for lunch. Since I work on a university campus, the closest place for grub is the student union, which features a mixed-bag food-court, including a few fast-food establishments and a salad bar (my preference). I was surprised to see an unusually long line trailing from the food court, wrapping around the hallway. A peek into the cafeteria clarified the situation: these folks were all waiting to buy a sandwich at Chick-fil-A.

Unless you live in a yurt, you have probably heard about the Chick-fil-A stuff in the news. I’ll summarize: the place is run by a self-described Christian who donates a good chunk of its profits to religious groups that work to to ban gay marriage and keep gay people off of anti-discrimination protection lists (you heard that right—millions of dollars to make sure it stays illegal to love and legal to hate).

Many Americans bravely faced heartburn & diarrhea today in order to prevent gays from getting married.

After this (old) news hit the media this week, lots of shit hit the proverbial fan: inevitable anti-Chick protests ensued (including mayors who want the restaurant to GTFO of their respective cities), the restaurant’s genius PR team tried to win back support by allegedly creating fake Facebook pages and spinning up lies about Jim Henson, and conservative Mike Huckabee got incensed enough about the protests to declare today “Show Your Support for All of the Above Day.”

This last bit I learned from the cashier at the union’s convenience store. I had to buy a pre-packaged deli sandwich because the chicken people had flooded the food court, and as the cashier—a twenty-something college student—was ringing me up, I asked her if she knew what was going on.

“Mike Huckabee declared today a day of support for the business,” she said, and immediately her face turned red, her voice took on an odd tremble. She was either completely against the idea, or fiercely protective of it—I couldn’t tell—and I could see that part of her unease came from the fact that she didn’t know how I was going to react. Was I for Chick-fil-A or against it? Did I support marriage equality or was I homophobic? Which news media outlet was I getting all my information from? A twist of anxiety filled the air between us, a potential fire that could manifest as either rage or loyalty if either one of us chose to ignite it.

We didn’t. I got my change. We wished each other a good afternoon. I took my sandwich and left without ever figuring out whether we were supposed to be friends or enemies. Sometimes it’s just not that clear what we’re supposed to do.

To be fair, Chick-fil-A released a statement that said it respects all customers, “regardless of sexual orientation,” but that seems to be a bit of a back-pedaling stretch, given its history of incorporating anti-gay propaganda into children’s meals and funneling money to groups that try to “cure” homosexuality but tout AIDS as God’s inevitable plan.

And it’s misguided to think that the people who came out for Chick-fil-A Appreciation Day aren’t making an anti-gay statement, that they’re simply identifying themselves as aligned with the principals of Christianity. You can support the institution of Christianity without standing in a fast-food line. You know how? Be fucking nice. Toss a neighbor a real smile sometime. The great part is that none of this will diminish you; rather, you will flourish, and so will everyone around you.

This is what I saw today: approximately 70 people standing in line for a fast-food restaurant, all willing to sacrifice their own personal time (the average wait for a sandwich appeared to be about 20 minutes), money ($6.50 for a meal + $9 to park in the garage), and physical health (obesity, heart disease, and type-2 diabetes), just so that I cannot marry my partner.